A successful 2014 crowd-funding campaign raised the funds needed to create a shorter version of Thin Ice, which will be distributed by American Public Television to 90 stations in 40 states from 1 July.

One of the film’s executive producers, Emeritus Professor Peter Barrett, says the timing couldn’t be better.

“Thin Ice will be screening in the crucial months before the culmination of efforts toward a global emissions reduction agreement in the 2015 Paris Climate Conference in December. The film allows ordinary people around the world to see leading climate scientists at work and find out why we need to aim for zero carbon emissions.”

Read more about the Kickstarter campaign and view a list of donors.

The Thin Ice project began over a cup of coffee at a climate change and governance conference in Wellington in 2006. Peter Barrett (Victoria University) suggested to Simon Lamb (then at Oxford University) that he make a film about the science of climate change with his friend David Sington (DOX Productions)

The idea was to let people see an insider’s view of the astonishing range of human activity and scientific work needed to understand the world’s changing climate. Viewers would then be able to decide individually and collectively how to deal with the issue.

Simon and David talked to researchers on four continents as they explained their work measuring changes in the atmosphere, oceans and ice sheets. They also discovered how scientists use computer models to understand the effects of those changes. 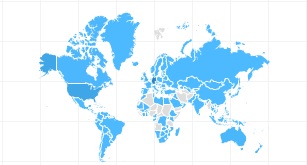 The global launch of Thin Ice on Earth Day 2013 was a huge success. With the generous support of students, teachers, academics, scientists, and the public, Thin Ice was screened in over 200 locations around the world on that day. An additional 19,000 online viewings were made. People watched the film in at least 120 countries, on all seven continents – from Antarctica and Mongolia to Libya and Peru, Thin Ice reached around the world.

This map shows the global reach of the Earth Day launch of the movie on April 22nd and 23rd, 2013. Blue shading shows countries where the film was streamed online. Germany and the United States recorded the most views during the launch week.