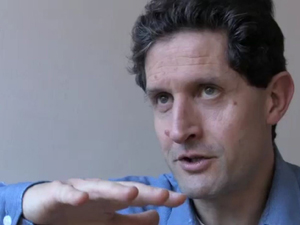 If you asked an atmospheric physicist what would happen if the level of greenhouse gases (such as carbon dioxide) in the atmosphere increased, they would tell you that you will get a warming. This conclusion is based on scientific principles in physics that have been known for over a hundred years. In particular, it is based on the fact that greenhouse gases are strong absorbers of infrared radiation.

Myles Allen talks about how CO2 warms our climate

The way that this warming effect actually operates is best understood in terms of the balance between the energy the Earth receives from the Sun, and the energy it radiates back into space.

The hotter something is, the more energy it radiates. The Earth mainly radiates infrared radiation. However, because greenhouse gases like carbon dioxide are strong absorbers of infrared radiation, this radiation can only escape into space at high levels in the atmosphere, where the concentration of these greenhouse gases is very low. So it is the temperature higher up in the atmosphere – at an altitude of about 5 km – that determines the rate at which this energy is radiated out into space. This is called the radiating level.

In the long term, the temperature of the radiating level is set by the requirement that the atmosphere must reach an energy balance such that the amount of energy radiated out into space equals the amount received by the Earth from the Sun.

As we emit more and more carbon dioxide into the atmosphere, the amount of greenhouse gases in the atmosphere steadily increases, constantly pushing the radiating level (where the atmosphere loses energy into space) higher and higher.

But, as any meteorologist regularly observes, the atmosphere gets colder as you go higher, decreasing by about 6°C every kilometre. This is primarily a consequence of weather, controlled by the rising and sinking of air masses.

In fact, a rise in the radiating level of only about 300 meters is enough to cause about 2°C of global warming. This is why global temperatures are so sensitive to our greenhouse gas emissions.