Since 1957, measurements have shown that levels of greenhouse gases, such as CO2, are rising year by year. Our understanding of the atmosphere predicts a significant warming from this – is it happening? 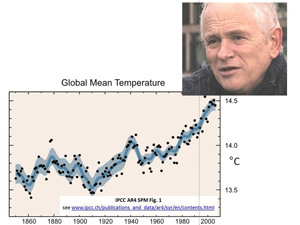 Daily temperatures are routinely recorded all round the world. Several international science organisations have been compiling this data to look for global trends in temperature over the last 150 years or so.

By averaging temperature measurements all round the world, including the surface of the oceans, they have all found essentially the same result – average temperature varied little until the 1920s, and since then there has been an overall warming of about 0.8°C.

Extending these records further back in time is more difficult, but estimates from tree rings, peat bogs, corals and written records indicate that in the last thousand years, the 20th century has been the warmest, and the 17th century the coldest.