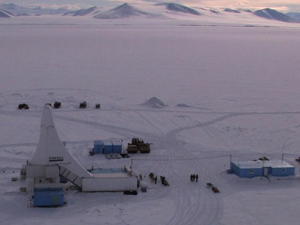 In the past, levels of greenhouse gases were higher and lower than they are today. Studying the climates of these times is a good way to improve our understanding of the sensitivity of Earth’s climate to greenhouse gas emissions.

Scientists dig deep into the rock and sand of the sea floor to sample Earth's climate history many millions of years ago, since the oldest ice cores go back only 850,000 years. The ANDRILL project cored back to 20 million years ago.

Martin Brasier explains how we know climates were warmer in the past:

Geological record of past warm climates

Tim Naish and colleagues show how to get climate history from under an Antarctic ice shelf:

Climate change in the past

Geological records tell us that Earth’s climate has been far from stable, and has swung between warm and cold periods. These marked changes through history are strong evidence that there is no stabilizing mechanism to keep the climate constant. We should expect future climate change from both human and natural causes.

In the past, natural geological processes have controlled levels of CO2 in the atmosphere. Volcanoes add CO2 to the atmosphere, but the weathering of rocks tends to suck it out of the atmosphere. Over millions of years, there are times with many eruptions and reduced mountain building, and CO2 builds up in the atmosphere. This is the likely explanation for the high CO2 levels that peaked around 50 million years ago.

When mountain building is happening on Earth, more rock weathering takes place and CO2 is sucked out of the atmosphere. The growth of the Andes and Himalayas over the past 50 million years is likely to be the reason that the level of CO2 in the atmosphere declined to the relatively low levels seen in pre-industrial times.

As plants and animals grow, they lock up carbon in their bodies. If, when they die, they are buried and become layers of rock, this carbon stays out of the atmosphere. If humans dig up and burn coal, oil and gas, they returning much of this carbon back to the atmosphere, causing the level of CO2 to rise.

The rise in atmospheric CO2 over the past 100 years is many, many times faster than from natural geological processes. CO2 emitted from global volcanic activity is less than 1% of our industrial CO2 emissions – the ice core record shows that the level of CO2 in the atmosphere only changed by about 20 ppm in the 10,000 years preceding the industrial era, but has risen by over 100 ppm in the last 150 years.

The current rise in CO2 is at least 300 times faster than the combined effect of natural processes during the last ten thousand years.

Computer models of these past climates suggest that the long term climate sensitivity is at the high end of current estimates, in the range 4 to 5°C per doubling of carbon dioxide in the atmosphere.