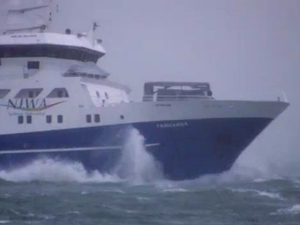 Two thirds of the surface of the Earth is ocean. The oceans play a huge role in the link between our emissions of carbon dioxide and global warming.

Simon travelled to the mighty Southern Ocean that surrounds Antarctica, and spoke to scientists about the goals and the challenges of their work.

Scientists on board the New Zealand research vessel Tangaroa, talk about the realities of research as they sample the water column in the deep ocean for temperature, salinity, carbon dioxide, and living organisms.

Heading out to sea

Forests of the ocean

Out of our comfort zone

For the surface of the planet to warm, the oceans must warm as well. At the moment the oceans are absorbing an enormous amount of heat. This is delaying the final warming caused by the increase level of carbon dioxide and other greenhouse gases.

In fact, the observed global warming over the past 30 years or so is between half and two thirds of the expected warming, once the oceans heat up. So, warming from past emissions will continue for some decades.

Ocean water absorbs carbon dioxide from the atmosphere, either through direct mixing of ocean water and air, or through the growth of marine algae.

At the moment, the oceans are absorbing about a third of the carbon dioxide we are emitting, but scientists are unclear whether it will continue to do so in the future, as the oceans become warmer and more acidic.