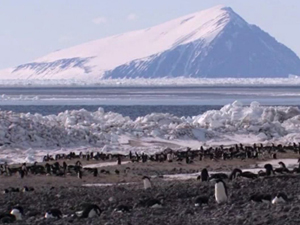 Our planet’s past gives an idea of the climate we are heading for, if greenhouse gas emissions continue at this rate. What do we think is "dangerous climate change"?

Opinions vary, but many people follow the European Commission's guideline as a 2°C rise above pre-industrial levels (1.2°C above today). Such a rise is increasingly likely as CO2 levels rise above 400 ppm. The dangers come from more extreme climate events – storms, river and coastal flooding, heat waves, droughts, and cold snaps.

These videos explore various views what the future may have in store:

Sea level rise is likely to be one of the most dramatic long-term consequences of global warming.

Ice sheets in the Arctic and the Antarctic lock up huge amounts of water. Around three million years ago, when the level of CO2 was only a little higher than today, global temperatures were 2–3°C higher and the West Antarctic ice sheet, as well as the Greenland ice sheet, likely did not exist and parts of the East Antarctic ice sheet, did not exist. This caused sea levels to be 10–20 m higher, though keep in mind it takes them (centuries to millennia) for them to grow and melt.

Scientists are predicting about one meter of sea level rise by the end of the 21st century if we continue with our current emissions of greenhouse gases.

Ocean acidification and changes in rainfall

As the oceans absorb CO2 they become more acidic. This will eventually make life impossible for many marine organisms.

There will also be changes in rainfall, with wetter regions becoming wetter and drier regions drier. The Asian monsoon is projected to become more intense, which will bring flooding and erosion. Desert regions, such as the Sahel in Africa and the interior of Australia, are likely to expand.

Ultimately, the planet is on course for the same climates that were last experienced about 50 million years ago, when the North Pole had tropical temperatures and there was no permanent ice anywhere on the planet.

The role of science

Studying Earth’s climate enables predictions to be made about the future. Understanding the causes of modern global warming, and knowing what the climate was like in the past, when atmospheric CO2 levels were much higher, help us look into the future.

As our scientific understanding grows, so will our ability to predict the future. Armed with this knowledge, we are in a much better position to prepare for the future and shape the future we want.

Scientists will also have a major role in developing technologies to both reduce CO2 emissions and allow us to adapt to a warmer world. This is just one of many examples