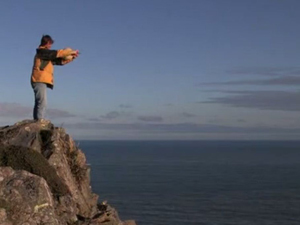 Earth’s atmosphere is measured routinely at a few ‘clean air’ sites around the world. The most important one in the southern hemisphere is at Baring Head in New Zealand, where the air blows from Antarctica and the Southern Ocean. These measurements provide an accurate and continuous record of the composition of the cleanest air on the planet for the past 40 years.

Katja Reidel Martin Manning, Neil Bowles and Hugh Mortimer talk about measuring the composition of the atmosphere at Baring Head.

How CO2 traps the Sun’s warmth

The Baring Head measurements clearly show that the concentration of CO2 in the atmosphere is rising year by year. At the time of filming (2008) this was around 385 ppm (parts per million), increasing by about 2 ppm each year, and now, in 2014, it is over 400 ppm.

The rise in CO2 during the industrial era can be clearly linked to human burning of fossil fuels because of a number of factors:

•          we know how much fossil fuel we are burning – we can even observe the CO2 coming out of power stations, using satellite sensors

•          we can observe oxygen levels falling in exactly the right proportion, because combustion uses up oxygen as it combines with carbon to make carbon dioxide.

The decrease in oxygen is barely noticeable because of the much higher overall concentration of oxygen in the atmosphere (~20%), compared to that of carbon dioxide (0.03%). In fact, only about half the CO2 created from our burning of fossil fuels is currently ending up in the atmosphere – the rest is being absorbed by the oceans and Earth’s ecosystems. Read more about the Southern Ocean.

Given current rates of energy consumption, and that we burn all the fossil fuel there is, it is relatively straightforward to show that CO2 levels in the atmosphere in the early 22nd century will be about four times pre-industrial levels. As we will see later this will have profound consequences for future climate and life on Earth. Read more about future climate.