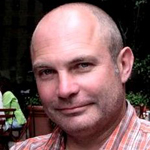 David Fairhead has edited many different genres of films and programmes since he began in 1984. However the mainstay of his work has been in science and history documentaries.  He has edited 18 films for the BBC’s Horizon, the world’s longest running science series, and innumerable other films and programmes, including the BBC’s Timewatch, The Planets, Seven Wonders of the Industrial World, and Channel 4’s Equinox strand. In 2006 he edited David Sington’s film In the Shadow of the Moon, a feature documentary about the Apollo astronauts, which won the Audience Award for best International Documentary at Sundance in 2007.  This was followed by The Flaw, an analysis of the 2008 financial crash, which also premiered at Sundance.  His latest feature doc is McCullin, a powerful film about the war photographer Don McCullin. He has been working on Thin Ice with David Sington and Simon Lamb for over two years.