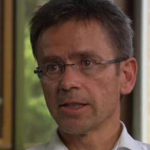 Stefan studied physics at the Universities of Ulm and Konstanz and physical oceanography at the University of Wales (Bangor), completing a thesis on general relativity theory. He then moved to New Zealand, obtaining his PhD in oceanography at Victoria University of Wellington in 1990.  He then moved to the Potsdam Institute for Climate Impact Research, where he works on the role of the oceans in climate change. Since 2000 he has also taught Physics of the Oceans at Potsdam University. Stefan is a member of the Academia Europaea and was a lead author for the IPCC 4th Assessment Report. In 2010 he became a Fellow of the American Geophysical Union. He has published over 80 scientific papers and co-authored four books, including Our Threatened Oceans (2009) and The Climate Crisis (2010). Stefan actively contributes to public discussion on climate science and is a co-founder of the blog Real Climate.