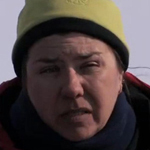 Katie graduated with a BS in Fisheries and Wildlife from the University of California, Davis, in 1986, and then earned an MS in 1991 and a PhD in 1997 in Fisheries and Wildlife from the University of Missouri. She joined the Department of Fisheries and Wildlife at Oregon State University in 2001, and in 2011 became a part of the Oregon Cooperative Wildlife Research Unit there.  She studies the effects of habitat characteristics and abiotic factors, particularly those related to climate change and anthropogenic landscape changes on survival, reproduction, occupancy, and foraging ecology of animals.  Along with her students and collaborators, she is currently working on the population ecology of the Northern Spotted Owl, the breeding ecology of Rusty Blackbirds in Alaska, the occupancy status of the Oregon Slender Salamander, the survival and movements of Black-Tailed Deer in Oregon, and Adélie Penguins in Antarctica.