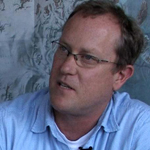 Tim Naish is Professor and Director, Antarctic Research Centre, at VUW. His main research interest is the past behaviour of Antarctic ice sheets over millions of years, recorded as cyclic patterns in sedimentary strata. As a PhD student at Waikato University in the 1990’s he was able to use new dating techniques to link stratal cycles to variations in Earth’s orbit over the last 5 million years. Since then he has focussed on drill cores from the Antarctic continental margin, which show that a significant part of the Antarctic ice sheet collapsed a number of times 3 to 5 million years ago, when Earth was only 2-3°C warmer than today. Tim has received a number of awards, including the James Lee Wilson Award in 2008 for Excellence in Sedimentary Geology. He currently chairs the ANDRILL (ANtarctic DRILLing) Steering Committee and is deep-time lead author for the IPCC 5th Assessment Report.