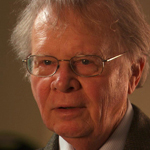 Wally has been studying the oceans since 1953 when he began his PhD at Columbia University. He is currently Newberry Professor of Earth and Environmental Sciences and has authored over 450 journal articles and 10 books. He is well known for discovering the role played by oceans in triggering the abrupt climate changes which punctuated glacial time, along with the idea of a global "conveyor belt" linking circulation throughout the oceans. However, his contributions stretch far beyond the "conveyor"; e.g.  applying carbon isotope chemistry to paleoceanography and founding carbon cycle science. He has received many awards from Academies in North America and Europe for advancing our understanding of climate change by discovering the important role of the oceans and their interactions with the atmosphere. His concern for Global Warming is clear in the 2008 book “Fixing Climate: What Past Climate Changes Reveal About the Current Threat--and How to Counter It”.