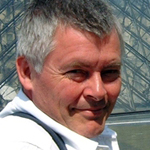 Philip has worked with colleagues and students on many aspects of the birth, evolution and death of mountain belts for over thirty years. He began by working on the history of metamorphism in the Alps, and more recently has worked on the mechanics of mountain growth in Asia, particularly Tibet. The need for new data to test his ideas about continental deformation led him into geodesy, and he has been involved in programmes to measure the deformation of the continental crust in Greece, Turkey, and New Zealand. More recently, he has been working on the thermal structure of the upper mantle beneath arc volcanoes. Philip graduated from the University of Oxford in 1976 and returned later as lecturer and then Professor. He was elected to the Royal Society in 1999, and awarded the Murchison Medal of the Geological Society of London in 2004.